Where is Butte? And why would anyone want to visit this tiny almost-ghost town?

It may look like a tiny, run-down place to stop and fill up your gas tank while on a road trip, but Butte, Montana is actually a lot more interesting than it initially seems. The buildings are old, some are in disrepair, and (at least on the day I was present) the weather is less than desirable. In fact, the weather is probably the exact opposite of what most individuals want when they head out on a vacation. ‘So what’s your point?’, you might be asking.

Well, what Butte lacks in aesthetics, it makes up for in its history. Although its’ nowhere near as busy as it was in the height of its’ era, Butte used to be the place to be in the early 1900’s.

At the peak of it’s splendor, Butte housed over 100,000 residents. The entire city of Butte had electricity a full 5 years before New York City. They the nations’ first “sky-scraper” a year before anyone else (which is defined as at least 8 stories with an elevator). Butte was kind of a big deal, back then. They were an extremely rich community, due entirely to the coppermine owned by Anaconda Mining Company, who employed thousands of miners to work round-the-clock thousands of feet below the earth. Butte had boasting rights: they produced 1/3 of the WORLD’s copper supply, and WW1 was won in part due to the sheer amounts of metals mined and used in the war.

You can take a tour Berkeley pit, the same one that supplied the wealth and lifestyle to the city of Butte. It’s so acidic that it once killed an entire flock of geese (300 of them) that unfortunately landed in the water.

After taking a quick peek of the mining area that supplied the wealth, I’m sure you are wondering why nothing around Butte looks quite so splendid. The most interesting parts of the city are not on ground level. Despite federal guidelines that forbid the sale and consumption of any alcoholic spirits, Butte stayed true to its’ nature and went under ground. A maze of tunnels just beneath the basements of houses, restaurants and ground-level establishments linked a network of highly-illegal speakeasy’s and brothels. The city sidewalks were double-deckers, with steam ventilation from the mines heating the lower levels and preventing ice and snow from building above. The local police department turned a blind eye to the madness, forcing the FBI to make (if at all) enforcement within the area. At the height of its popularity, Butte had 800 working girls at every shift, meaning that there were around 2400 call girls working in Butte every day. They also had hundreds of bars hidden behind vault doors in barber shops, beneath average-looking businesses, and hidden out of eye-sight for anyone “out of the know”.

Butte was the Las Vegas of the early 1900’s. Even the police department partook in the craziness. In their defense, they did, however, ambush Al Capone as he was entering Butte from the train station, and forbid him from entering, ever. Although, one night in their drunk-tank might have been enough for most criminals, as the jailhouse had an average temperature of 105 F.

After exploring the Berkeley Pit and the Underground Tour of Butte, take a (Free!!) tour of the Mineral Museum on the Montana Tech Campus. You will find UV-reactive rocks in a dark room, donated gems, minerals, and other beautiful pieces. There are also dinosaur and saber-tooth tiger fossils on display.

Do you know of any cities/towns with super-interesting history? Where are they? 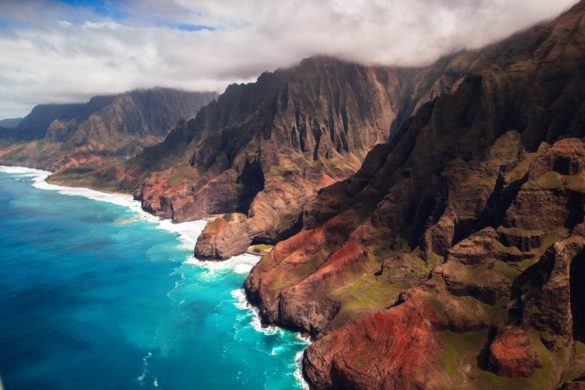